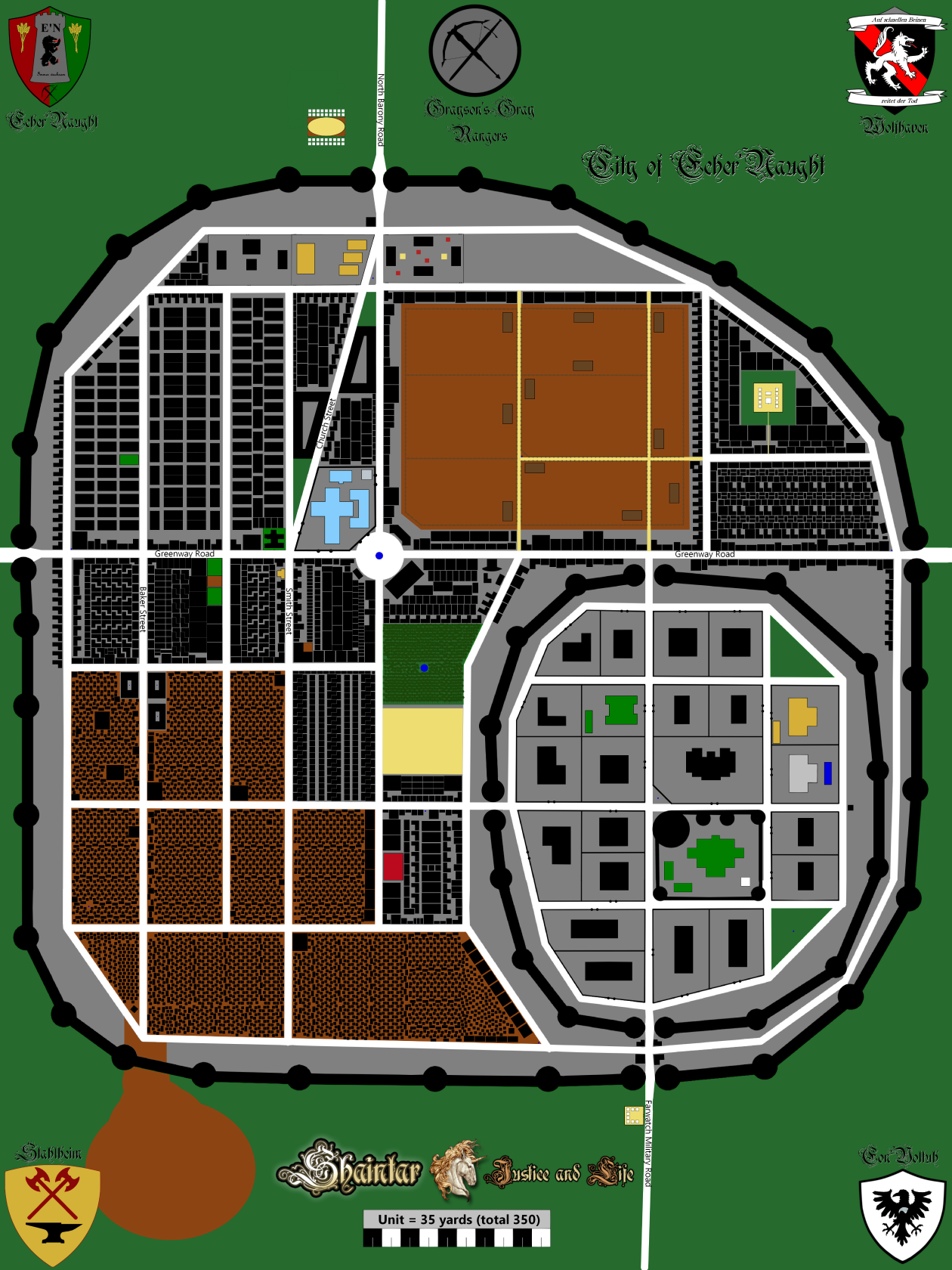 Town Districts:
High Towne (Beacon Hill): Taking up most of the South East quarter of the town, built high upon the largest hill anywhere for miles around, High Towne is full of beautiful houses and opulent manses. This district is also one of the few made almost entirely of stone, as many of the structures are hundreds of years old. Beacon Hill is also surounded by its own curtain wall, though smaller than the town wall, impressive nevertheless.

Low Town: South of the city and filling the entire South West quarter of the city, Low Town is the domain of the poor, the downtrodden and those with no where else to turn. Most of the town’s workforce lives in the warren of twisting streets and hodgepodge of stone, brick and wood structures. Unilke other areas of the city, Low Town (also the lowest point) has mostly open sewers so the streets quite literally run with filth.

Main Street (Greenway Road): Running almost due East-West for a mile, Main Street is the main thoroughfare through town. By Royal decree, no structure may encroach upon the road so that it may be narrower than 2 wagon or 3 ox-drawn carts in width within the walls. Lining the road are many shops, warehouses, blacksmiths, weapon and armor smiths, bakers and taverns. Flanked at the west wall by the Elven Gate, and the east wall by the Dwarven Gate, the highway is the oldest road in the region, build by the first Olarans.

Red Lamp District: Couched between Low and High Town, at the base of Beacon Hill, but outside its wall, lies the Red Lamp District. So named for the prostitutes that walk its streets. At its center, like a red heart is the Red Lamp, a house of ill repute, a club where any vice, any desire may be filled, for a price. But beware, the Red Lamp is ruled by a powerful and sensual mistress who does not take kindly to those who threaten her establishment.

Stockyard District: North of Main Street and taking up most of the North East quarter of the city lies the Stock Yards, large, smelly, and eternally busy. After bread, stock animals are Echer’Naughts second largest cash cow. Every Barony, independent rancher and long driven herd collects here to be auctioned off and sold. Not surprisingly, Olara’s elite cavalry unit, the Hammerfell riders have a large encampment here to ensure they get the choicest pick of horseflesh as it is driven in.

Under the command of Field Marshal Graf Von Wrangel, today, the camp serves anywhere from 200-800 riders, though typically there are around 500 riders at any given time. These men oversee and guard the Hammerfall stables and breeding yards, the largest such operation outside of the city of Harken itself.

Warehouse District: North of Main Street and taking up most of the North West quarter of the city lies the Warehouse district, apply named for the numerous Dry Good storage warehouses lining the streets.

by: howardrbrandon
See All Pages

I'm sorry, but we no longer support this web browser. Please upgrade your browser or install Chrome or Firefox to enjoy the full functionality of this site.